REVIEW The Night She Disappeared by April Henry 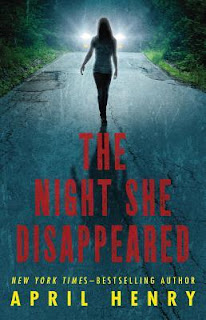 Gabie drives a Mini Cooper. She also works part time as a delivery girl at Pete’s Pizza. One night, Kayla—another delivery girl—goes missing. To her horror, Gabie learns that the supposed kidnapper had asked if the girl in the Mini Cooper was working that night. Gabie can’t move beyond the fact that Kayla’s fate was really meant for her, and she becomes obsessed with finding Kayla. She teams up with Drew, who also works at Pete’s. Together, they set out to prove that Kayla isn’t dead—and to find her before she is.

I've gotta say, I'm becoming a big fan of April Henry. I'm not usually one for mystery, but her books are something different. Usually in mystery, you're following around some kind of police officer or detective as he tries to solve it. Not with April Henry's books. They put you front and center.


In Girl, Stolen (read my review here) we followed a kidnapping as it ran it's course and got to experience two points of view--the accidental kidnapper, and the blind girl who found herself taken hostage.

The Night She Disappeared is told through a handfull of points of view, but the main ones are Drew, the boy who had been working the late shift at the pizza place, whose coworker is Kayla, the girl that disappeared. Drew was the last one to see or hear from her before she went missing. The other main point of view is Gabie, another coworker of thiers, and she was the girl who was the kidnapper's actual target.

When Drew tells Gabie that the kidnapper asked about her the night Kayla disappeared, Gabie becomes obsessed. It should have been her. Soon her entire life starts to revolve around Kayla's disappearance, and trying to figure out what happened to her.  I totally got sucked into the mystery.  I kept forcing myself to put the book down so I wouldn't skip ahead and find out whodunit!

I loved the interaction between Gabie and Drew. They're two very unlikely people to bond, but they are drawn together by what happened to Kayla, and there's a hint of romance budding between the two of them, which I adored. It was fun how they kind of danced around each other. Each of them seemed to like the other, but neither of them seemed to know what to do about it, since they were so different. They're two people who have no one to lean on, so they're leaning on each other.

Loved the mystery and the touch of romance in this book, and I can't wait for more from April Henry!