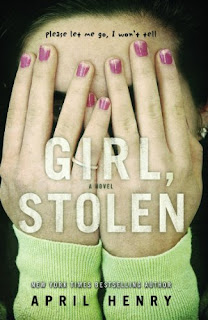 Sixteen year-old Cheyenne Wilder is sleeping in the back of a car while her mom fills her prescription at the pharmacy. Before Cheyenne realizes what's happening, their car is being stolen--with her inside! Griffin hadn’t meant to kidnap Cheyenne, all he needed to do was steal a car for the others. But once Griffin's dad finds out that Cheyenne’s father is the president of a powerful corporation, everything changes—now there’s a reason to keep her. What Griffin doesn’t know is that Cheyenne is not only sick with pneumonia, she is blind. How will Cheyenne survive this nightmare, and if she does, at what price?

This was a story full of mystery and horror.

When Cheyenne falls asleep, waiting for her stepmom in the car, she doesn't expect to awaken to the car itself being stolen, but that's exactly what happens.  And Griffin, her unwitting kidnapper, doesn't realize it until it's too late, and then he doesn't know what to do.

So he makes a big mistake...he chooses not to let her go.

Soon both teens are in way over their heads.  Griffin never meant to kidnap anyone, especially not a dangerously ill blind girl.

I liked how sympathetic Griffin was as a character, and how much he tried to help and protect Cheyenne.  I also loved how strong Cheyenne was, despite her terrifying situation.

This was a fairly short read that packed a big punch.  I was sorry to see it end.  I'd have loved to see even more in that world, and I felt that though the story was good, it could have gone on a bit longer.