REVIEW The Whisper by Emma Clayton 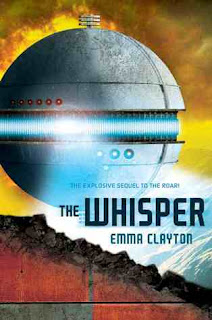 Suddenly alert to the microchips implanted in their brains, the army of stolen children revolts! But the response of the tyrant Mal Gorman is swift and brutal: He quickly quells the mutiny, sweeping up the fleeing children in spiked nets like so many trapped fish and dragging them back to their training camp.


Juiced by potent Everlife pills, the once cadaver-like Gorman has chemically reversed the aging process; his diabolical mind is now powered by the body of a teenager. But psychic twins Ellie and Mika can read his every evil thought, and they refuse to let him wage his battles. Using their mutant powers, they abduct Gorman and take him beyond The Wall, to the wildlife he so fears. Before all-out war erupts, the brother and sister are determined to reconcile humankind with nature -- and to free the captive children.

This is the sequel to The Roar, a middle-grade dystopian that I ADORED.  You can read my review of that one here, but if you haven't read it, I suggest you pick these both up and read them back-to-back.

I don't want to give too much away, since The Roar had so many twists and turns (and, much to my joy, a monkey friend) that I don't want to ruin the ending, but The Whisper picks up right after it left off.  At first, I was afraid that I would have to re-read The Roar, but this book managed to scoop me back up and take me along on an adventure that I didn't see coming.

Where the first book had a lot of world-building and a lot of plot and character development, The Whisper was pretty much non-stop action and I was completely swept up in it.  I loved seeing the characters of the children again, and how they interacted with eachother.  I also liked the changing viewpoint, as most of The Roar was from Mika's point of view, now that the children are a little more scattered, it was great to see all that was going on in the world around them.  I also loved how the relationships between the characters had developed.

And Mal Gorman, you are dastardly.

If you haven't checked out this series, I higly recommend it.  It's definitely a middle-grade title, as the main characters are all 12 to 13 years old, but it's full of action and the world they inhabit certainly isn't for the faint of heart.  These two books, The Roar and The Whisper, have a high place on my shelf, and I will definitely be reading them again.