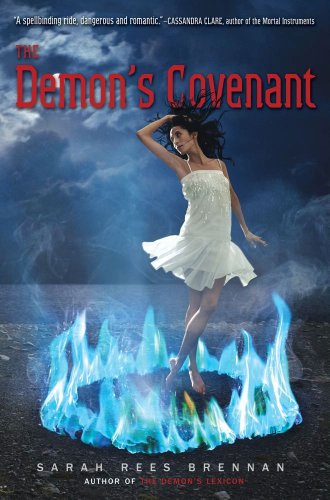 WARNING: THIS SUMMARY & REVIEW CONTAINS SPOILERS FOR THE DEMON'S LEXICON (aka Book One of the series) I'll try to keep them to a minimum...but...you've been warned.  Read Demon's Lexicon before you read this review.  That's an order! -geekgirl
Mae Crawford's always thought of herself as in control, but in the last few weeks her life has changed. Her younger brother, Jamie, suddenly has magical powers, and she's even more unsettled when she realizes that Gerald, the new leader of the Obsidian Circle, is trying to persuade Jamie to join the magicians. Even worse? Jamie hasn't told Mae a thing about any of it. Mae turns to brothers Nick and Alan to help her rescue Jamie, but they are in danger from Gerald themselves because he wants to steal Nick's powers. Will Mae be able to find a way to save everyone she cares about from the power-hungry magician's carefully laid trap?
Why I Read It
It's the sequel to The Demon's Lexicon, which was AMAZING.  Also, because the author is hilarious on twitter.  Also, because book three (The Demon's Surrender) is coming out fairly soon, and I needed to feel prepared.

What I <3'd
I love the entire world that the author has created.  It's modern day England, and there's demons.  And magicians.  And Demons.  The demons are beyond awesome.
After the revelation at the end of Lexicon, we get an even deeper insight into Nick, even though he's not the one narrating this book.  We get a chance to understand him and his relationships with the other characters so much better, and it made me love him even more.  Nick is so far away from perfect it isn't funny, but he's trying so hard in his own way.
Also, Jamie.  Pretty much everything Jamie said in the entire book either made me laugh, or touched my heart.
Sarah Rees Brennan's characters just have so much depth to them, that it's easy to fall in love with them.  There are a few new ones in this book, and they're all so complex and there's so much more to them than just good and evil.


What I Didn't <3
At first I was a little disappointed that Covenant wasn't narrated by Nick, like Lexicon was, but Mae grew on me pretty quickly, and it was nice to see a different point of view.  Other than that, my only complaint was that I had to give the book back to my library.  I'll be picking up my own copy of this very soon.


GEEKOUT Moment!
Just like with Lexicon, Covenant has a twist close to the end.  I'm not going to tell you what it is, but I loved it!
And since I'm not telling you what it is, here's one of my fave moments instead:


"Sometimes when you pull knives on people, they get this impression that you're going to hurt them, and then they're completely terrified. Crazy, I know!"
"Okay," said Nick. He turned to Jamie & popped his left wrist sheath again. "Look."
Jamie backed up. "Which part of 'completely terrified' did you translate as 'show us your knives, Nick'? Don't show me your knives, Nick. I have no interest in your knives."
Nick rolled his eyes. "This is a quillon dagger. That's a knife with a sword handle. I like it because it has a good grip for stabbing."
"Why do you say these things?" Jamie inquired piteously. "Is it to make me sad?"
"I didn't have you cornered," Nick went on. "You could've run. And this dagger doesn't have an even weight distribution; it's absolute rubbish for throwing. If I had any intention of hurting you, I'd have used a knife I could throw."
Jamie blinked. "I will remember those words always. I may try to forget them, but I sense that I won't be able to."

This was a great addition to the Demon's Lexicon series.  I can't wait for Demon's Surrender.