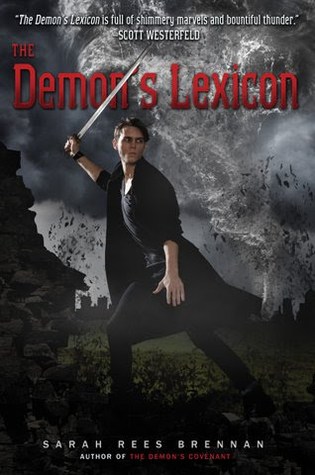 Nick and his brother, Alan, have spent their lives on the run from magic. Their father was murdered, and their mother was driven mad by magicians and the demons who give them power. The magicians are hunting the Ryves family for a charm that Nick's mother stole -- a charm that keeps her alive -- and they want it badly enough to kill again. Danger draws even closer when a brother and sister come to the Ryves family for help. The boy wears a demon's mark, a sign of death that almost nothing can erase...and when Alan also gets marked by a demon, Nick is desperate to save him. The only way to do that is to kill one of the magicians they have been hiding from for so long.
Ensnared in a deadly game of cat and mouse, Nick starts to suspect that his brother is telling him lie after lie about their past. As the magicians' Circle closes in on their family, Nick uncovers the secret that could destroy them all.
This is the Demon's Lexicon. Turn the page.

Can I just say Dude, that was intense.
There.  I said it.


This was an amazing read.  It took a little bit for me to get into it, because at the beginning of the story you're dropped into this completely new world.  Well, the world's the same, but there's so much that's different.  The mythology on this one isn't like anything I've ever read before.  This story has nothing to do with vampires or werewolves.  There's normal people, there's magicians, there's demons, and then there's people like Nick and his brother Alan who know a bit about everything, and are stuck in the middle.
Nick and Alan were brought up to fight the magicians who sacrifice normal people to gain control over demons, in order to harness their powers.  But they don't do it out of a good-vs-evil kick.  They do it to protect their mother, who was once a magician herself, until she stole a very powerful charm and is now being hunted by her former circle.
I don't want to give too much away, since this was such an amazing twisty-turny story, but I'll tell you how easy it was for me to go from knowing nothing about what this book was about, to being completely immersed in the mythology and the characters.  Nick's a bad-ass, Alan's his sweet older brother, Jamie is the sixteen year old boy who gets marked by a demon and needs their help, and Mae is Jamie's pink-haired kick-ass older sister who refuses to leave until the brothers help.
I loved the interaction between all of the characters.  They all had a different dynamic, and I found that so compelling.
This was a great read.  Go check it out.  You won't regret it.
Now if I could only get my hands on book two...
Happy Reading!
-geekgirl