The Gardener - S. A. Bodeen 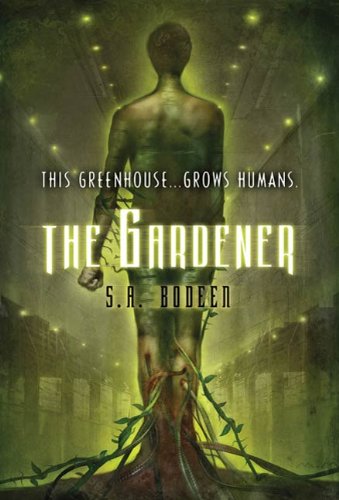 Mason has never known his father, but longs to. All he has of him is a DVD of a man whose face is never seen, reading a children’s book. One day, on a whim, he plays the DVD for a group of comatose teens at the nursing home where his mother works. One of them, a beautiful girl, responds. Mason learns she is part of a horrible experiment intended to render teenagers into autotrophs—genetically engineered, self-sustaining life-forms who don’t need food or water to survive. And before he knows it, Mason is on the run with the girl, and wanted, dead or alive, by the mysterious mastermind of this gruesome plan, who is simply called the Gardener.
Will Mason be forced to destroy the thing he’s longed for most?

I was a huge fan of S. A. Bodeen's book The Compound, so I decided to pick this one up, even though the summary really didn't grab me.


Mason, the main character, was my favorite part of this novel.  He's sixteen and has felt like an outsider for years, ever since he was a kid when a neighbor's dog attacked him and left his face brutally scarred.  That, combined with his huge size, would have made a lesser character angry and withdrawn, but Mason instead took on the role as hero.  Using his size and intimidating appearance he has been able to face down schoolyard bullies for years, and wants nothing more than to be a protector of others.


So when he discovers the girl of his dreams tucked away in a secret wing of the local old-folks home, he can't stop himself from trying to help her.


While I love sci-fi, I found this story to be a little rushed and coincidental.  They're learning about autotrophs in school, and suddenly Mason was caught up in a whole situation about them.


All in all, I greatly enjoyed the characters of this story, but I was left a little wanting when it came to tying the story together.  That being said, I'm sure that if they ever made a movie based on this book, I'd love it.  It seemed a lot more movie-paced than novel-paced to me.