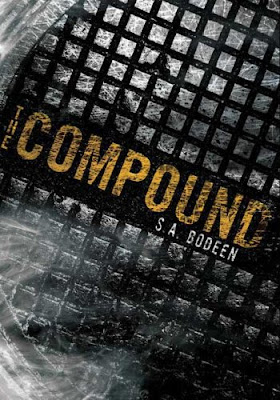 Eli and his family have lived in the underground Compound for six years. The world they knew is gone, and they've become accustomed to their new life. Accustomed, but not happy.
For Eli, no amount of luxury can stifle the dull routine of living in the same place. with only his two sisters, only his father and mother, doing the same thing day after day after day.

As problems with their carefully planned existence threaten to destroy their sanctuary - and their sanity - Eli can't help but wonder if he's rather take his chances outside.

Eli's father built the Compound to keep them safe. But are they safe - or sorry?


I read this one a while back, but I really enjoyed it.  I remember I started reading this one late at night, as a curled up in bed to go to sleep.  I thought Oh, I'll just read a little until I'm tired enough to sleep.  Three hours later...yeah.  I stayed up really late (when I had work the next morning) to read this one in its entirety.

I've always been interested in end-of-the-world type stuff, and when I read the summary for this one, I knew it would fit the bill.  There is a small flashback to when the world ended, and Eli's father dragged his family down into the compound that he'd built to keep them safe.  The only problem is that Eli's twin brother and grandmother are left behind, and because of that, Eli is never really able to fully adapt to life inside the compound--always feeling like something's missing.

It's been six years since the end of the world, and it's starting to become pretty clear that the compound is not going to hold them forever.  Supplies are running out, his father starts acting strangely, Eli starts to become concerned.

And then Eli detects a signal from the outside...

This was a tense, exciting read.  There were a lot of twists and turns, and more than once I sat up in bed, startled, going Wait...you're doing what now?

Great read.  Can't wait for more from this author!