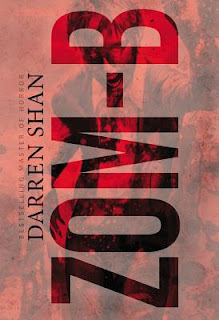 When news reports start appearing of a zombie outbreak in Ireland, B's racist father thinks it's a joke-- but even if it isn't, he figures, it's ok to lose a few Irish. B doesn't fully buy into Dad's racism, but figures it's easier to go along with it than to risk the fights and abuse that will surely follow sticking up for Muslims, blacks, or immigrants. And when dodging his fists doesn't work, B doesn't hesitate to take the piss out of kids at school with a few slaps or cruel remarks. That is, until zombies attack the school. B is forced on a mad dash through the serpentine corridors of high school, making allegiances with anyone with enough gall to fight off their pursuers.


Since I started reading this book, I've heard a lot of mixed reviews.  But I'll be honest about a couple of things.  One, I didn't actually read the summary before I stared the book (the book was recommended to me by Christa at More Then Just Magic, who knows what I like so when I found a copy I just snagged it without question) and Two, I've never read anything by Darren Shan before.  So I didn't know what I was getting myself into but I was just kind of like "*shrug* zombies, I'll give it a go."  Yeah, I have a lot of internal monologue that goes like that.

So I'm not sure if I should warn you about what you're going to get into, but I'm probably going to anyway, since otherwise, how am I supposed to review this book.

B, who's the main character, is scrappy, has a bad attitude, and is racist.  (Hence the bad reviews...people don't like seeing the world through the eyes of a racist). The thing is, B doesn't want to be racist.  B's dad is racist and it has kind of just happened so as not to disappoint him.  Or get beat up, because that happens too.  B's dad is kind of a jerk.  Okay, he's a real jerk, but you're not supposed to like him anyway (I don't think).  So yeah.  Racist.  So, SO racist.  Consider yourself warned.  But the thing is, B is aware of it, and knows it's wrong and doesn't want to be that way.  And for that I couldn't help but be intrigued.  Seeing the world through B's eyes was interesting, and that was before the zombie apocalypse even really started.

So while this book might not be for everyone, I say give it a chance.  See the world through someone else's eyes, even when you know they're wrong and kind of a jerk.  I loved it.  Also?  Zombies.  And a twist I couldn't believe.  I may have squealed.  I do that sometimes.  It's a thing.