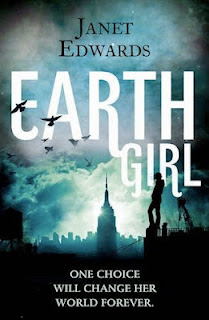 2788. Only the handicapped live on Earth. While everyone else portals between worlds, 18-year-old Jarra is among the one in a thousand people born with an immune system that cannot survive on other planets. Sent to Earth at birth to save her life, she has been abandoned by her parents. She can’t travel to other worlds, but she can watch their vids, and she knows all the jokes they make. She’s an ‘ape’, a ‘throwback’, but this is one ape girl who won’t give in.

Jarra invents a fake background for herself – as a normal child of Military parents – and joins a class of norms that is on Earth to excavate the ruins of the old cities. When an ancient skyscraper collapses, burying another research team, Jarra’s role in their rescue puts her in the spotlight. No hiding at back of class now. To make life more complicated, she finds herself falling in love with one of her classmates – a norm from another planet. Somehow, she has to keep the deception going.

A freak solar storm strikes the atmosphere, and the class is ordered to portal off-world for safety – no problem for a real child of military parents, but fatal for Jarra. The storm is so bad that the crews of the orbiting solar arrays have to escape to planet below: the first landing from space in 600 years. And one is on collision course with their shelter.


I've been putting off reading this book because I've heard mixed reviews and I wasn't sure that I wanted to try it.  I've been led astray by pretty covers before, and for anyone that knows me you'll know why I got so attached to this cover (the colour...oh, the colour *pets the pretty*).  But in the end I decided to give it a chance and I'm SUPER glad I did.

I loved this book.  One of the things I heard in the mixed reviews was that people didn't really like the language of the book, but that didn't bother me so much.  The only thing I really noticed regarding the language was the slang the characters used, and considering they're in the future, it's understandable that they have their own slang that takes a little time to get used to.

I loved Jarra.  Well, let me clarify...I loved Jarra MOST OF THE TIME.  There's a stretch midway through the book where she kind of has a personality overhaul and I kind of hated her during that period (I don't want to spoil you as to the reason why) but for the most part, she was great.  She's tough and spunky and is trying to prove to the world that even though she's an "ape"--a person who is considered a genetic throwback because they can't survive on any planet other than earth--that she's just as good as as anyone else.  There's a lot of stereotyping in this book in regards to "apes" and "exos", those who live on earth, and those who live in the worlds that humanity has expanded to, and that's a huge focus.  It was interesting for me to see just how different characters perceived each other through the stereotypes they'd adopted.

There's romance in this book but it's definitely not the focus, and I liked that. This was a great sci-fi read and I've heard rumours that there's going to be a sequel.  I hope they're true, because I can't wait to see more of this adventurous universe.