June 15, 2012
I've been on holidays this week and I'm amazed at the fact that it's Friday AGAIN.  How did this happen?  Where did my vacation days go?

But this means it's time for another Weekend Wishlist post.  And that's always fun.

For those of you new to the blog (hello!) Weekend Wishlist is a little post I created where I could feature older titles that have caught my attention. 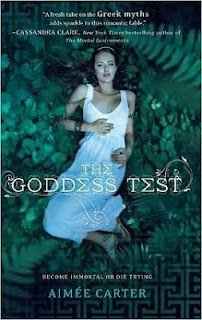 EVERY GIRL WHO HAS TAKEN THE TEST HAS DIED.

It's always been just Kate and her mom--and her mother is dying. Her last wish? To move back to her childhood home. So Kate's going to start at a new school with no friends, no other family and the fear that her mother won't live past the fall.

Then she meets Henry. Dark. Tortured. And mesmerizing. He claims to be Hades, god of the Underworld--and if she accepts his bargain, he'll keep her mother alive while Kate tries to pass seven tests.

Kate is sure he's crazy--until she sees him bring a girl back from the dead. Now saving her mother seems crazily possible. If she succeeds, she'll become Henry's future bride and a goddess.


I can't believe I STILL HAVEN'T READ THIS BOOK.  What's wrong with me, guys?  I feel like such an epic fail.

I was going to pick it up when I was book shopping yesterday, but IT WASN'T THERE.

Not cool, world.  Not cool.

So yeah, that's my pick for this week.  Are there any backlist titles you've got your eye on?  Let me know in the comments!