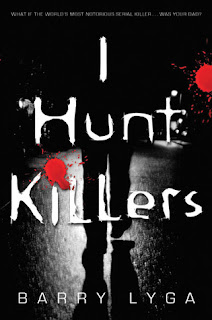 
What if the world's worst serial killer...was your dad?

Jasper (Jazz) Dent is a likable teenager. A charmer, one might say.

But he's also the son of the world's most infamous serial killer, and for Dear Old Dad, Take Your Son to Work Day was year-round. Jazz has witnessed crime scenes the way cops wish they could--from the criminal's point of view.

And now bodies are piling up in Lobo's Nod.

In an effort to clear his name, Jazz joins the police in a hunt for a new serial killer. But Jazz has a secret--could he be more like his father than anyone knows?

Oh, this one is getting SO MANY STARS.  ALL OF THEM.  You have no idea.

Really, there are no words for how much I loved this book.  The characters, the setting, the mystery...everything was spot-on and I was able to get completely lost in the world and the story that the author had created.

Jazz is one of the best narrators I've come across in awhile.  He's pretty screwed up, what with being the son on a notorious serial killer and all.  He's been trained all his childhood to follow in his father's footsteps, and now, even years after his father was caught and taken away, it's hard for him to silence the running commentary his father has in his head of just how easy it would be to kill someone.  He constantly has to fight with himself to NOT think about how easy it would be to take down that cop he's watching, how to take his weapon...how to end his life.

So he's turned to another method to sort of channel his darker urges.  When a body turns up in a field, Jazz sneaks to the side of the crime scene to investigate exactly who it was that was killed, and how the killer did it.  That's where we meet Jazz, on his belly hidden in the grass at the edge of a field, binoculars in hand (special ones his dad picked out years before he'd been caught, ones that don't reflect the light so that the police that are investigating the scene won't see the little flash of light that would give his position away), spying on the crime scene.  That's where the story begins and that's where Jazz realizes that there's more to this killing than the cops are wiling to accept.  That there's a new serial killer in town.

And it isn't Jazz.

I loved Loved LOVED Jazz's interactions with the other characters.  While Jazz is fighting with himself over whether or not he's actually a good person or if he's a killer that just hasn't killed yet, his friends have taken on a different approach to looking at him.  The sheriff, the man who put Jazz's dad in prison, has a sort of "you're creepy, kid...if I didn't know you DIDN'T kill this woman, I'd totally think you did because you're so weird and also please stop hanging around crime scenes because that is what serial killers do" kind of mentality towards him....in a very affectionate-slash-exasperated way.

I was absolutely ABSORBED in this book.  I loved it so SO much.

I don't want to give anything away, so I'll stop my review here...but in summary OMG LOVE!

I'm really, REALLY hoping there's a sequel in the works for this book.

p.s.  Jazz's best friend also happens to be a hemophiliac...which creates an interesting dynamic when Jazz drags him along to crime scenes and to break into the morgue and the boy BLEEDS ALL OVER EVERYTHING.  Yeah.  I loved the two of them.