REVIEW 172 Hours on the Moon by Johan Harstad 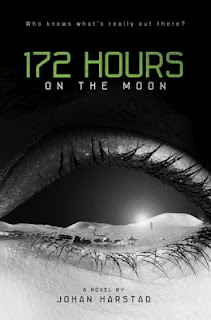 It's been decades since anyone set foot on the moon. Now three ordinary teenagers, the winners of NASA's unprecedented, worldwide lottery, are about to become the first young people in space--and change their lives forever.

Mia, from Norway, hopes this will be her punk band's ticket to fame and fortune.

Midori believes it's her way out of her restrained life in Japan.

Antoine, from France, just wants to get as far away from his ex-girlfriend as possible.

It's the opportunity of a lifetime, but little do the teenagers know that something sinister is waiting for them on the desolate surface of the moon. And in the black vacuum of space... no one is coming to save them.

In this chilling adventure set in the most brutal landscape known to man, highly acclaimed Norwegian novelist Johan Harstad creates a vivid and frightening world of possibilities we can only hope never come true.

This book is hard for me to review because while all I've been hearing from my fellow bloggers was rave reviews...I didn't love it.

I think this one sits firmly in the 3.5 star range for me.

I LOVE science fiction.  I really do.  I'm such a huge geek, you have no idea.  But although I'm a firm believer in the fact that you have to suspend disbelief when you read a story, I couldn't for the life of me figure out why they were sending teenagers to the moon.  If anyone who has read the book knows why, PLEASE let me know.  I think I missed something.

I liked the characters and the switching points of view.  They really were typical teenagers...the two girls both seemed to pine over Antoine, but really, can you blame them?  He's a cute French guy.  There is no bad there.  And I really liked the dynamic and bonding between the three of them when they finally got to the moon and things started going wrong.  They banded together like a little family.  LOVE.

I LOVED the setting.  The moon-base was brilliantly described.  Totally felt like I was there.

That being said, once they got to the moon and everything started going to hell, the book felt a little rushed.

By the end I was sitting there going "wait...what?  what's going on?" and that was a little disconcerting.

So in summary, I'm a little torn about this one.  I'm not really sure what I think about it.  I did enjoy it though, and if you're a fan of science fiction, I urge you to give this one a shot.