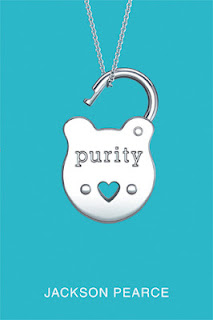 
A novel about love, loss, and sex -- but not necessarily in that order.

Before her mother died, Shelby promised three things: to listen to her father, to love as much as possible, and to live without restraint. Those Promises become harder to keep when Shelby's father joins the planning committee for the Princess Ball, an annual dance that ends with a ceremonial vow to live pure lives -- in other words, no "bad behavior," no breaking the rules, and definitely no sex.

Torn between Promises One and Three, Shelby makes a decision -- to exploit a loophole and lose her virginity before taking the vow. But somewhere between failed hookup attempts and helping her dad plan the ball, Shelby starts to understand what her mother really meant, what her father really needs, and who really has the right to her purity.

This has been one of my favourite books this year, which was completely unexpected considering 1. It isn't a very long book, 2. It has a lot to do with religion and generally I steer clear from books like that and 3. While I love Jackson Pearce's Fairy Tale re-tellings, I wasn't sure what to expect from her with a contemporary novel.

All these (imagined) issues were quickly dashed as soon as I sat down in my reading chair and whipped through this fabulous book.

Shelby was a great character.  She's been following the three rules her mother gave her before she died.

1. Love and listen to her father
2. Love as much as possible
3. Live without restraint

She's been doing great with number 3.  I loved that Shelby had a life-list of all the things she wanted to do.  And I loved the fact that the list was closely guarded by her friend Jonas.

She's been also doing the best she can with rule number 1, but when her father decides to throw himself into working on the town's Purity ball, everything goes to hell.  Because if she pledges her purity to her father (which is done at the end of the ceremony, so that the fathers can keep them safe until marriage) it means she can't have sex until she's married. And she isn't planning on getting married any time soon.  So, stuck between a rock and a hard place, she decides her only option is to have sex before the purity ball.

This creates problem after problem for Shelby and her friends as they try to track down the right guy, keep her from getting caught, and try not to ruin their friendship over it.

I don't want to give anything else away, but seriously...READ THIS BOOK!  It's wonderful.

p.s. Jonas is my favourite and all his interactions with Shelby were amazing. Their relationship made me feel ALL THE FEELINGS.
review