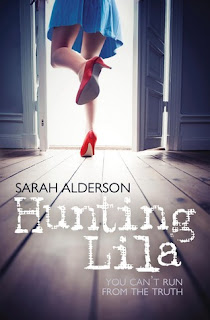 17-year-old Lila has two secrets she’s prepared to take to the grave. The first is that she can move things just by looking at them. The second is that she’s been in love with her brother’s best friend, Alex, since forever.

After a mugging exposes her unique ability, Lila decides to run to the only people she can trust—her brother and Alex. They live in Southern California where they work for a secret organization called The Unit, and Lila discovers that the two of them are hunting down the men who murdered her mother five years before. And that they’ve found them.

In a world where nothing and no one is quite as they seem, Lila quickly realizes that she is not alone—there are others out there just like her—people with special powers—and her mother’s killer is one of them…

First, even before I managed to get my hands on a copy, I PINED for this book. Have you seen the cover? (*points*) Isn't it gorgeous?!?  LOVE.

I loved Lila.  She felt like a very genuine seventeen year old girl...she's a little hurt by the fact that she's been held at arm's length by her father and her brother ever since her mother's death, she thinks about school and fitting in, and her future college.  Oh, and she's also head-over-heels in love with Alex, her brother's best friend, who she has known all her life.  And really, once you see him through her eyes, you can't really blame her.  Alex has always been there for her.  And quite frankly, he is swoon-worthy.  There.  I said it.

So when she's mugged in England, she rushes back to California to find comfort in her brother...and with Alex.

The only thing is...Lila isn't exactly a normal seventeen year old girl...she can move things with her mind. And it wasn't the mugging that had her so freaked out, it was what she DID during it.

And she's getting stronger.

So she takes solace in her brother and in Alex, but she quickly notices that they are keeping something from her.  Something big.  Something to do with their work with the government.

I don't want to give too much away. One of the best things about the story was the twists and turns the author took me on, but if you have a chance to pick up Hunting Lila, I definitely recommend it.

The only thing that bothered me about this book was the fact that Lila was supposed to have grown up mainly in the U.S., but her point of view was full of Britishisms (like "maths" and "flat" and so forth) which I thought was a little out of place.  But then, after I had finished reading, I remembered a friend of mine who has spent her whole life in Canada, but with British parents, and even she uses Britishisms without thinking about it.  So while it struck me as strange at first, I finally realized that yes, that was realistic.

This was a great read full of action and adventure and some of the best romantic pining that I've read in a long time.

I can't wait for the sequel!

Sarah Alderson, the author of Hunting Lila, was kind enough to do a little interview with me on the blog...

1. What made you want to tell as story about a girl with a superpower?
Because I was tired of all the books about girls who needed rescuing. I wanted to see a girl who could kick ass.


2. Lila is in love with Alex before the book even began. What made you choose to go the lifelong crush route over the introduction of a new love interest?
I think it’s more believable and that it appeals to readers. It’s so romantic. Alex has known Lila since she was born and they have all these gorgeous memories. He’s always been there for her and she trusts him implicitly. It also raises interesting questions about how a relationship that’s built on friendship (and he’s her brother’s best friend) can morph into a romance. There’s all that tension and history to overcome (as well as a brother’s anger).


3. In the book, Lila has the power to move things with her mind. If you could choose a power for yourself, what would it be?
I’d like to be able to teleport anywhere in the world. I’d fly to Sydney to meet the bloggers I love over there, then I’d head to LA to hang out with my actress friend MyAnna who’d give me all the low-down on Twilight (she plays Tanya Denali) and to party with her, then I’d go to Vancouver for breakfast because I’ve never been there before and am dying to go. Then I’d head to the Caribbean where one of my best friend’s lives to have lunch with her on the beach, before spending an afternoon shopping in New York. Then I’d meet up with all my friends in my hometown of London for dinner and a pint down the pub. The next day I’d maybe spend the day eating in Paris or strolling around Amsterdam before jumping over to Istanbul and then on to Tokyo for another wild night out. Wow. I just wouldn’t stop. I’m a true vagabond at heart.


4. If you had a superpower, would you be a superhero, a supervillian, or would you hide it from the world and pretend to be ordinary?
I’m not sure. I think I’d hide it like Lila tries to do. People tend to look at you differently and treat you differently if they think you’re something else…even as an author people tend to see you as an author – as a persona - and not just as a person. It creates weirdness. Like being chased around supermarkets by eleven year olds. So I’d rather just pretend to be non super-powered and get on quietly with my life.


5. Is Losing Lila going to be the final book, or is there more in store for us?
I have no idea yet. We’ll see how Losing Lila goes. I’m tied up with writing projects until early next year so I’ll have to see.


6. (And since I feel the need to ask EVERYONE this...) Do any of your characters have a zombie apocalypse plan?... Do YOU?
I plan every day for the coming Zombie apocalypse. I am fully stocked up with Baked Beans and Tequila, the two things I think will see me through any invasion. I am also practicing my dance walking, which to some people looks a little like a Zombie Shuffle. This will help me blend in and avoid detection. I also just bought some super sharp kitchen knives from Ikea. I think I could use those to chop off Zombie limbs.