REVIEW After the Snow - S.D. Crockett 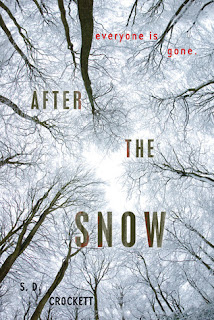 Fifteen-year-old Willo was out hunting when the trucks came and took his family away. Left alone in the snow, Willo becomes determined to find and rescue his family, and he knows just who to talk with to learn where they are. He plans to head across the mountains and make Farmer Geraint tell him where his family has gone.

But on the way across the mountain, he finds Mary, a refugee from the city, whose father is lost and who is starving to death. The smart thing to do would be to leave her alone -- he doesn't have enough supplies for two or the time to take care of a girl -- but Willo just can't do it. However, with the world trapped in an ice age, the odds of them surviving on their own are not good. And even if he does manage to keep Mary safe, what about finding his family?


The reviews from my fellow bloggers haven't been great for this book, and I completely understand why...this book is HARD to read.  When I picked it up, I had a vision in my mind of how this book would go.

But when I started reading, my vision was thrown to the wayside by Willo's narration.  He's fifteen years old, and, talks in a manner that I can only describe as six-year-old-caveman.  It really threw me off.  At first I thought it was because he'd been raised his entire life in a world that had (barely) survived the apocalypse-by-snow.  Education surely wasn't what it used to be, I assumed.  But as he encounters more characters throughout his travels, I realized that wasn't the case, because the majority of them spoke normally.  It was just Willo.  He had somehow reverted back to a simpler way of thinking, and, to be honest, it was hard to read.

It took me awhile to get used to the language, since the book is told entirely through Willo's first-person point-of-view.  What he thinks, you think, what he sees, you see, and it's all very simplistic.  It wasn't what I was expecting at all.

That being said, once I managed to get past that, I did enjoy the story quite a bit.  Willo is not one made for relationships, but the tug he feels towards certain characters is very real, and it comes through the writing.  I really enjoyed his growing relationship with Mary, from seeing her as a burden to missing her when she's gone.

Also, there are twists and turns in this book I was really, REALLY not expecting.  And I loved them.

This book is not for everyone, and Willo isn't the best narrator, but I enjoyed the story and the world that the author created.  The ending was bittersweet and even now I'm wondering what happened to the characters.