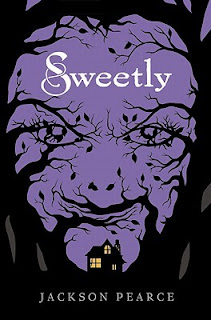 SWEETLY is a modernization of Hansel and Gretel and a companion book to SISTERS RED.

Twelve years ago, Gretchen, her twin sister, and her brother went looking for a witch in the forest. They found something. Maybe it was a witch, maybe a monster, they aren’t sure—they were running too fast to tell. Either way, Gretchen’s twin sister was never seen again.

Years later, after being thrown out of their house, Gretchen and Ansel find themselves in Live Oak, South Carolina, a place on the verge of becoming a ghost town. They move in with Sophia Kelly, a young and beautiful chocolatier owner who opens not only her home, but her heart to Gretchen and Ansel.

Yet the witch isn’t gone—it’s here, lurking in the forests of Live Oak, preying on Live Oak girls every year after Sophia Kelly’s infamous chocolate festival. But Gretchen is determined to stop running from witches in the forest, and start fighting back. Alongside Samuel Reynolds, a boy as quick with a gun as he is a sarcastic remark, Gretchen digs deeper into the mystery of not only what the witch is, but how it chooses its victims. Yet the further she investigates, the more she finds herself wondering who the real monster is, and if love can be as deadly as it is beautiful.


Oh man, I liked this one even more than I liked Sisters Red, and that book was awesome.

This wasn't at all what I was expecting.  I knew that Sweetly took place in the same universe as Sisters Red but I really didn't see any of this coming, and that, my friends, is a tribute to the awesomeness that is Jackson Pearce.

Gretchen and Ansel used to have a sister--Gretchen's twin, but one day they were out in the forest and she was stolen by a witch, and they haven't seen her since.  Now, years later, they've been kicked out of their stepmother's house and are making their way to the ocean--Gretchen is more than a little afraid of being around forests after what happened to her sister.  But they don't quite make it.  Their car breaks down outside a small town and they end up staying in a chocolatier, a candy shop run by the town's beautiful outsider.

But strange things are going on in the town.  Girls have gone missing year after year, and the forest is still a little too close for comfort.

Seriously, such a great new take on the Hansel and Gretal tale.  I loved hearing the story through Gretchen, as she both tries to remember what happened--why her twin was taken and she wasn't--and as she tries to figure out exactly what's going on with Sophia, the owner of the candy shop.

If you liked Sisters Red, you will love Sweetly.  They are more closely tied together than I could have ever predicted.  Also, Jackson Pearce's decriptions of chocolate and candy throughout the entire thing totoally had me under its thrall.  I wanted to eat EVERYTHING I could get my hands on.  Well played, Miss Pearce, well played.

Great Read!  I can't wait to see how Fathomless ties in.