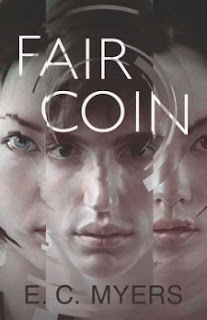 Sixteen-year-old Ephraim Scott is horrified when he comes home from school and finds his mother unconscious at the kitchen table, clutching a bottle of pills. The reason for her suicide attempt is even more disturbing: she thought she’d identified Ephraim’s body at the hospital that day.

Among his dead double’s belongings, Ephraim finds a strange coin—a coin that grants wishes when he flips it. With a flick of his thumb, he can turn his alcoholic mother into a model parent and catch the eye of the girl he’s liked since second grade. But the coin doesn’t always change things for the better. And a bad flip can destroy other people’s lives as easily as it rebuilds his own.

The coin could give Ephraim everything he’s ever wanted—if he learns to control its power before his luck runs out.

Oh, I loved this book!  If you missed my gushing on twitter as I read it, here's the deal: This book reads like an awesome episode of The Twilight Zone, and that fact alone stole my geeky little heart.

The book begins when Ephraim gets home from school late one day (he stayed late to see his crush, an uber-nerdy girl Jena) only to find that his normally-drunk mother is babbling nonsense about him being dead, and that she has overdosed on pills.  He rushes her to the hospital, and learns there that a boy that was identified as him due to having his library card in his pocket had been hit by a bus and killed...and that his mom had identified the body as Ephraim.  After his mom is stabilized, he starts picking through the bag of the dead boy's stuff that they'd given his mom, thinking it was his, and there he finds a very strange coin.  He pockets it, and the next day he finds a note in his locker, telling him to flip the coin and make a wish.

So he does.  He wishes his mom hadn't overdosed, that she wasn't in the hospital.

That's when things start to get weird.  Because his wish works.

Each time Ephraim makes a wish, he gets what he wants but something else changes too.  Sometimes it's something small, like the colour of his backpack changing, but as he continues, the side effects start getting bigger and bigger.  And someone starts following him.

Seriously, this was such a fun read.  And I loved the characters.  Ephraim is just this sweet, kind of helpless guy who gets thrown into this situation, and he has to try to figure it all out and fix it before it's too late.  It's a lot to put on a guy who's previous hopes in life were for his mom to pull her act together and for his crush to like him back.  I loved him.  And the supporting characters of Jena, Ephraim's best friend Nathan, and even his mother all change and flow as the wishes keep coming, and we gets glimpses of what not only Ephraim's life would be like if things were different, but how everyone else around him would have changed as well.

Fair Coin ends on kind of a final note, but the author has confirmed that there will be a sequel, and I can't wait!  I have to know what happens next!