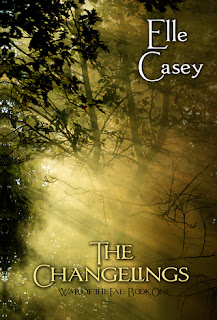 The Changelings
by Elle Casey
ebook
February 5, 2012
Buy the eBook

Jayne Sparks, a potty-mouthed, rebellious seventeen-year-old and her best friend, shy and bookish Tony Green, have a pretty typical high school existence, until several seemingly unrelated incidents converge, causing a cascade of events that change their lives forever. Jayne and Tony, together with a group of runaway teens, are hijacked and sent into a forest, where nothing and no one are as they seem. Who will emerge triumphant? And what will they be when they do?


I was chosen to be part of The Changelings Blog Tour, and I'm so glad I was, because I loved this book!

Neither Jayne nor her best friend Tony have really ever fit in.  Jayne has a pretty sizeable attitude problem, and is stuck living with an out of touch mother and her mother's dirt bag boyfriend.  Tony is painfully shy and his parents really have no interest in being part of his life.  So when Jayne's home life goes from bad to worse, Tony swoops in and decides to change it by giving her a way out.  Together, they run away from home and end up in Miami, where they meet a group of runaways and their life goes from strange to downright impossible.

Out of money and out of options, the group of teens volunteer for what they think is a paid fitness trial--they're offered five hundred dollars to complete it, but as soon as they arrive for the trial, things start getting very weird.  Given weapons and food and dumped in the middle of nowhere, the group is expected to get from one area of the wilderness to another, no matter what "obstacles" stand in their way.

Soon they find themselves surrounded by the mystical and the impossible, and they're on the run for their lives.

This was such a fun read.  I adored Jayne--she's so bad ass--and her relationship with Tony.  There's another boy, one of the runaways, named Spike, who is hot and a musician and who I know is supposed to be her main love interest in the series, but I've gotta say I'm rooting for Tony.  They're such so sweet together, and they'll do anything to protect each other.   I loved how smart Jayne was as well, how intuitive and how little she was willing to put up with anyone else's crap.  Tony, as previously mentioned, I loved.  He's this adorable nerdy guy who ends up in this whole situation just because he was trying to help Jayne in the first place.  They play really well off of each other.

The adventure in this book was great as well.  The teens are stuck in the forest with no way to get out, and very quickly they find themselves under attack.  Totally pageturning!

Seriously this was such a fun read.  The ending kind of blew my mind away.

I can't wait for book two!