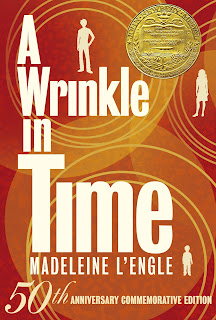 Fifty years ago, Madeleine L’Engle introduced the world to A Wrinkle in Time and the wonderful and unforgettable characters Meg and Charles Wallace Murry, and their friend Calvin O’Keefe. When the children learn that Mr. Murry has been captured by the Dark Thing, they time travel to Camazotz, where they must face the leader IT in the ultimate battle between good and evil—a journey that threatens their lives and our universe. A Newbery Award winner, A Wrinkle in Time is an iconic novel
that continues to inspire millions of fans around the world. This special edition has been redesigned and includes an introduction by Katherine Paterson, an afterword by Madeleine L’Engle’s granddaughter Charlotte Jones Voiklis that includes photographs and memorabilia, the author’s Newbery Medal acceptance speech, and other bonus materials.

It's the 50th anniversary of A Wrinkle in Time...and I've never read it.

Oh, sure, I leafed through it as a kid, but I never actually sat down and immersed myself in it.  Like I should have.


Me: *wrinkles forehead in concentration as she stares at the pages*
Boyfriend: What’s the matter?
Me: I’m confused.
BF: By what?
Me: *holds up book* The book is confusing me.
BF: Isn’t that a kid’s book?
Me: *defensive* Hey! It’s complicated, okay? There’s tesseracts and space-travel and shape-shifters and mentions of God and…and…

Yeah, it’s complicated and mind-bending as all get out. But the story is really, really good. There’s a reason this one is a classic.  It presents all these incredibly complex ideas in the form of a children's novel, and it doesn't dumb them down or apologize for it.

I really wish I’d read this one when I was a pre-teen. (If you’re a pre-teen or teen right now and you haven’t read it, I highly suggest you go pick it up…right now!) Meg is definitely a character I would have identified with at that age. She’s all kinds of awkward…the glasses, the braces, the overwhelming urge to punch someone who insults her, and the overwhelming feeling that she just doesn’t fit in. Her entire family’s pretty out of the ordinary. She’s the daughter of two scientists (one of whom left for a work project years ago and they haven’t seen or heard from him since) and her baby brother Charles Wallace—who hasn’t even started school yet—is uncannily intelligent and what seems to be more than a little psychic.

But that’s nothing until she makes the acquaintance of three very odd old ladies, and, along with Charles Wallace and her new friend Calvin, gets swept up in a mind-bending adventure the likes of which we’ve never seen.

Like I said, there’s tesseracts (please don’t make me explain what that is…my brain is still struggling to wrap itself around that concept) and space-travel and shape-shifters and all kinds of other things. And there’s the shadow, The Darkness, a dark, evil force that is trying to wrap itself around the Earth—and that HAS managed to take over other planets with incredibly frightening results—that it is up to the three of them to fight.

I really think I missed out on something by not having read this in my early life. The planet Camazotz is easily one of the creepiest places I can imagine and I think that definitely would have stuck with me to this day.

Also, I know for a FACT that if I’d read this when I was young, I would have been head-over-heels for Calvin. He’s this gangly red-headed teenage boy who is a little odd himself, and he bonds with Meg and her family as though it were his own. Also, even though Meg thinks herself plain and awkward, he tells her she has “dreamboat eyes”, and holds her hand and tells her she needs to keep wearing her glasses so that he’s the only one who knows how pretty her eyes are, so someone else won’t steal her away. *swoon!*

I LOVED this book, and I think you will too.