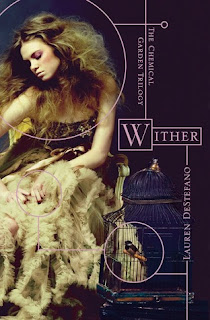 By age sixteen, Rhine Ellery has four years left to live. She can thank modern science for this genetic time bomb. A botched effort to create a perfect race has left all males with a lifespan of 25 years, and females with a lifespan of 20 years. Geneticists are seeking a miracle antidote to restore the human race, desperate orphans crowd the population, crime and poverty have skyrocketed, and young girls are being kidnapped and sold as polygamous brides to bear more children.


When Rhine is kidnapped and sold as a bride, she vows to do all she can to escape. Her husband, Linden, is hopelessly in love with her, and Rhine can't bring herself to hate him as much as she'd like to. He opens her to a magical world of wealth and illusion she never thought existed, and it almost makes it possible to ignore the clock ticking away her short life. But Rhine quickly learns that not everything in her new husband's strange world is what it seems. Her father-in-law, an eccentric doctor bent on finding the antidote, is hoarding corpses in the basement. Her fellow sister wives are to be trusted one day and feared the next, and Rhine is desperate to communicate to her twin brother that she is safe and alive. Will Rhine be able to escape--before her time runs out?

Together with one of Linden's servants, Gabriel, Rhine attempts to escape just before her seventeenth birthday. But in a world that continues to spiral into anarchy, is there any hope for freedom?

I only read Wither in the last month.  I KNOW.  What the heck, GeekGirl?  Why didn't you listen to everyone who was telling you to read it?  Why did you just leave it sitting there for NEARLY A YEAR, looking so flippin' gorgeous?  Why didn't you pick it up?

Well, my readers, this was another one of those books that had a HUGE amount of hype surrounding it, and, quite frankly, that SCARES me.  I'm always afraid that I'm going to settle in and read a book that everyone else loves and I just...won't.  (What?  It's a CONCERN!)

But let me tell you this...all the hype around Wither?  Totally deserved.  I LOVED IT.

The world that DeStefano has created is intricate and terrifying at the same time. It's made up of two extremes--the lower class, where Rhine grew up with her twin brother, which is populated by factories and orphanages and brothels; and the upper class, where technology and fashion and elegance reigns supreme. The story begins as Rhine is torn from the world she knew, and is thrust into the other as she is kidnapped and sold as one of three new "brides" to a twenty-one year old man named Linden.


At first, Linden is one of the villains of the piece, a despised figure that Rhine is determined to escape. But as she grows closer to Rose, Linden's First Wife, his favorite, who's on her deathbed--females only live to the age of twenty in this dystopian, and males only to the age of twenty-five--she starts to realize that he knows nothing of what's going on in his own home, and it is his father, Housemaster Vaughn, who's really pulling the puppet strings.

It soon becomes clear to Rhine that in order to escape, she has to get close to Linden, because he is the weak link. But it's not as simple as that. It never is.

The characters in this novel were so diverse and well crafted that I went from wanting to soothe one to wanting to throttle another as I read from scene to scene. Rhine is flawed and more than a little single-minded, but she is the hero of the story. She's not waiting around for anyone to save her. She intends to save herself.

Seriously, I LOVED this book. The sequel, Fever, comes out in just one week (keep an eye out for my review of Fever tomorrow), so if you haven't read Wither, NOW is the time!