November 22, 2011
Never judge a book by its cover.
If you've read my blog, you've probably heard me refer to myself as a shameless (SHAMELESS!) cover-judger. I know, I'm seeking help. But I don't think I'm the only one out there who does it.

So I invite you, readers, to share your opinion, and maybe we can find a cure for this problem together...or not.

And seriously...you ALL knew this one was coming...


But with a mother on the lam, the girl he loves about to take her place in the Mob, and new secrets coming to light, the line between what’s right and what’s wrong becomes increasingly blurred. When the Feds ask Cassel to do the one thing he said he would never do again, he needs to sort out what’s a con and what’s truth. In a dangerous game and with his life on the line, Cassel may have to make his biggest gamble yet—this time on love.

If you read my blog, you've probably noticed that I've pretty much been completely ignoring the fact that there is a new cover for this title.


Let's take a closer look at the new cover, just so you can see what I've been avoiding. 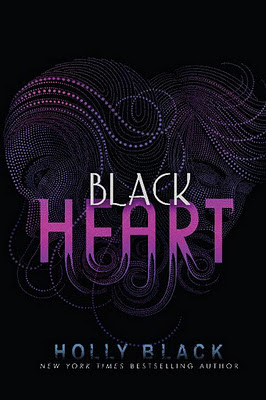 I'll be honest. It's a very pretty cover. I like the black and the purple and the font. I like the stylistic swirls making up the faces in the background.

However, it's not the cover I fell in love with.

I'm a HUGE fan of this series. If you haven't read it, I really recommend that you do. The worldbuilding here is phenominal. It's very dark and mysterious and kinda film noir-esque. And the original cover for Black Heart fit it perfectly. I loved the red and black and white. I loved the models. I loved the font. I loved that the font was different colours.


I LOVED THAT IT MATCHED MY OTHER BOOKS IN THE SERIES.

(I know they changed the first cover when they went to paperback, but it wasn't so big of a change...just revealing the model's eyes and changing the font a little. It wasn't nearly as big a change as this is.)

Now it won't match and this saddens me.