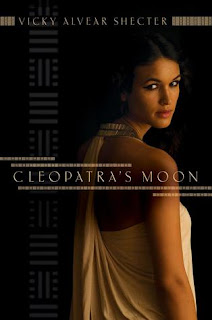 "The Luxe" meets the ancient world in the extraordinary story of Cleopatra's daughter.
Selene has grown up in a palace on the Nile with her parents, Cleopatra & Mark Antony—the most brilliant, powerful rulers on earth. But the jealous Roman Emperor Octavianus wants Egypt for himself, & when war finally comes, Selene faces the loss of all she's ever loved. Forced to build a new life in Octavianus's household in Rome, she finds herself torn between two young men and two possible destinies—until she reaches out to claim her own.
This stunning novel brings to life the personalities & passions of one of the greatest dramas in history, & offers a wonderful new heroine in Selene.

Years ago I took a course on Ancient History. This is the part that they missed.


The course I took on ancient Rome of course mentioned Cleopatra and her involvement and influences in history, but I don't recall anything said about her as a mother.

Frankly, I had no idea that she was a mother.

Cleopatra's Moon is a fictualized account of the life of Cleopatra's daughter, Cleopatra Selene, and it spans from her childhood at the beginning of the fall of Cleopatra's reign, through the years that followed, as she and her brothers are moved to Rome and "cared for" by the emperor Augustus' family.

Selene goes from being the only daughter of the most powerful woman in the world to a prisoner in a land that has painted her mother as an evil seductress.

It was a real treat to get to see through the eyes of a lesser-known character in history. The author has made this story so detailed that I found myself just falling into the world, being absorbed into the history of it.

This was such a great read. It was engaging and detailed and the author has managed to create a character out of a historical figure that was strong yet sympathetic, and I loved watching Selene interact with her family, her captors, and her friends. All of the relationships were so dynamic and different that I couldn't put it down.

I loved this one. Such a great read. I can't wait to see more from this author.