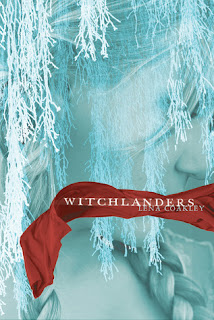 High in their mountain covens, red witches pray to the Goddess, protecting the Witchlands by throwing the bones and foretelling the future. It’s all a fake.
At least, that’s what Ryder thinks. He doubts the witches really deserve their tithes—one quarter of all the crops his village can produce. And even if they can predict the future, what danger is there to foretell, now that his people’s old enemy, the Baen, has been defeated?
But when a terrifying new magic threatens both his village and the coven, Ryder must confront the beautiful and silent witch who holds all the secrets. Everything he’s ever believed about witches, the Baen, magic and about himself will change, when he discovers that the prophecies he’s always scorned—
Are about him.

I'm going to try really really hard to be eloquent in this review...which will be difficult for me considering all I want to do is take a running tackle at each and every one of you and sit on you until you agree to read this book.

I know when I first heard about Witchlanders, I (along with a bunch of other bloggers and readers) was really excited about this one, because it had a male narrator.  There aren't a lot of male narrators in YA fiction at the moment, so this was really exciting.  And when you added the fantasy/magic aspect to that, along with the fact that the cover was absolutely drool-worthy, I couldn't wait to pick it up.

So when I began reading, I was surprised (and delighted) to discover that Witchlanders had not one, but TWO (count em!) male narrators.  Although the blurb only mentions Ryder, there's another narrator who plays just as large a role in the story, and they switch back and forth.

Also, THIS IS NOT A ROMANCE.  I just wanted to make that clear.  This is straight-up FANTASY, and it is AWESOME.  Coakley has created an entire new world for us readers to discover and play in, and I for one think she's done an incredible job.

Ryder has grown up in the Witchlands, halfway between the mountain, where the coven resides, and the town in the valley.  His father came from the town, but his mother is a witch, so he knows for a fact that everything the witches do is fake.  It's all pretend.  But when his mother starts having visions, and claiming they are real, he's stuck wondering whether or not what he's known be true all his life has been nothing but a lie.  After all, there's no such thing as magic...is there?

There is such beautiful contrast in this book.  Family and duty.  Magic and lies.  Belief and truth.  And the book is so beautifully written that I actually had a hard time reading it.  I have this problem where, if I'm really enjoying a story (normally a series), I start lagging behind so that I can stretch it out as long as possible.  I kept putting this book down to think about it, to stroke the cover, to let my mind wander through the Witchlands.  But I finished it.  And I loved it.  And although I haven't heard anything, I'm hoping against hope that the story will continue, because I'm not ready to let it go.

If you have any kind of fondness in your heart for fantasy, I urge you to read this book.  It's excellent.