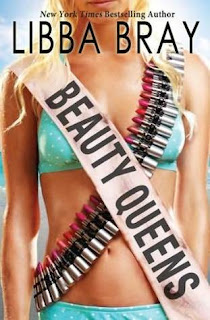 The fifty contestants in the Miss Teen Dream pageant thought this was going to be a fun trip to the beach, where they could parade in their state-appropriate costumes and compete in front of the cameras. But sadly, their airplane had another idea crashing on a desert island and leaving the survivors stranded with little food, little water, and practically no eyeliner.

What's a beauty queen to do? Continue to practice for the talent portion of the program--or wrestle snakes to the ground? Get a perfect tan--or learn to run wild? And what should happen when the sexy pirates show up?

Beauty Queens meet Lord of the Flies meet Lost in this incredible novel by Libba Bray.  Words cannot express how much I enjoyed this novel.

After surviving a plane crash on a deserted island, the beauty queens who didn't perish (and a lot of them did) attempt to build a society and survive until they are rescued.   Unfortunately, these girls have no idea what they're doing, and end up basing their society more or less on what they've learned as beauty queens (there's a lot of dance practice and waving and dieting going on), so things don't go as well as they hope.

Especially since no one seems to be rescuing them any time soon.  And slowly, as the girls focus more on survival than on their tans, they realize that each of them has a secret of her own, and that they aren't quite the same as everyone thinks they are.

Oh, and there's a hidden compound and a giant snake too.

The characters in Beauty Queens were some of the most unique, lovable characters I've ever encountered in YA fiction.  They were just so different, both from your average YA character, and from eachother.  And although the novel was full-to-bursting with adventure and mystery and zaniness, by far my favorite part was learning about the beauty queens--their histories, their secrets, and their relationships with eachother.

This was such a great read.  So fun and unexpected.  I devoured it.