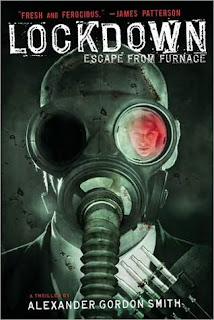 Beneath Heaven is Hell. Beneath Hell is Furnace.

Furnace Penitentiary: An underground hellhole. A place of pure evil with walls soaked in blood. Murderous gangs and vicious guards rule the darkness. Horrific creatures steal people away in the dead of night. And the impossible - escape - is the only hope.

This is the first book in Alexander Gordon Smith's Escape from Furnace series, and boy, was it a doozy.

It was violent and terrifying and I loved every minute of it.

Alex--who's far from the perfect kid, make no mistake--has been found guilty of a crime he didn't commit.  Sure, he's knocked over a few houses in his time, stolen some stuff, but he never killed anyone.  He was framed.  No one believes him though.  The society he lives in is pretty much terrified of child violence, especially after the child gangs killed so many people a few summers back, and they've cracked down on the problem the only way they know how.

They built Furnace, an inescapable prison built deep underground.  That's where they send Alex, where he's pretty much left for dead.

And, unfortunately, that's not the worst thing.  There are strange things going on in Furnace, and even stranger creatures.

And Alex wants out.

This book was such an incredible thrill-ride.  I couldn't put it down.

I cannot wait to get my hands on book two.  Expect a cliffhanger when you read this one folks, and have book two ready and waiting to go.  Don't make the mistake I did.