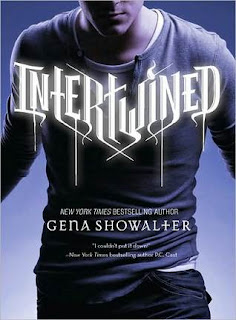 There's something about the new guy at Crossroads High…
Most sixteen-year-olds have friends.
Aden Stone has four human souls living inside him:
One can time travel.
One can raise the dead.
One can possess another human.
One can tell the future.
Everyone thinks he's crazy, which is why he's spent his entire life shuffled between mental institutions and juvie. All of that is about to change, however. For months Aden has been having visions of a beautiful girl—a girl who carries centuries-old secrets. A girl who will either save him or destroy him.
Together they'll enter a dark world of intrigue and danger…but not everyone will come out alive.

First of all, I absolutely adored Aden.  He's supposedly this bad-boy tough-guy, but really, he's all broken and a big sweetie, and is just trying to get through life without making everyone think he's absolutely nuts.  Which is hard, considering he's got four other souls trapped in his body that like to talk to him All. The. Time.

Then he meets a girl who somehow manages to make all the voices in his head stop.

And then everything else goes completely to hell.

I enjoyed the fact that the story was told in alternating points of view (between Aden and Mary Ann) and all the different supernatural elements at play.

This was a great read, and a great start to a series...even if I am the last person to read it.