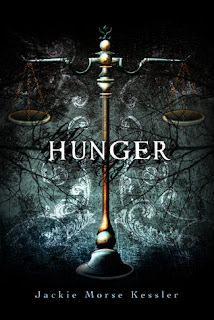 “Thou art the Black Rider. Go thee out unto the world.”

Lisabeth Lewis has a black steed, a set of scales, and a new job: she’s been appointed Famine. How will an anorexic seventeen-year-old girl from the suburbs fare as one of the Four Horsemen of the Apocalypse?

Traveling the world on her steed gives Lisa freedom from her troubles at home: her constant battle with hunger, and her struggle to hide it from the people who care about her. But being Famine forces her to go places where hunger is a painful part of everyday life, and to face the horrifying effects of her phenomenal power. Can Lisa find a way to harness that power — and the courage to battle her own inner demons?

Hunger is a small book that makes a big impact.

Lisa is anorexic, but she won't admit it.  But one night, when she goes a little too far with her mother's pills, Death gives her a choice.  She can either die, or she can become the new Famine.

Without really knowing what it means, Lisa chooses to become Famine.

This book is really hard for me to describe and review, because it's all about the nuances in Lisa's behavior.  Other people--especially her parents--don't really notice what's going on.  Not all of it anyway, but we as readers get to see right into Lisa's head, and what's going on there is more terrifying than the destruction Lisa helps create as one of the new Horsemen of the Apocolypse.

The "Thin Voice" in her head, the one that tells her she's too fat, and that dictates what she should eat by quoting calories back at her, was absolutely terrifying to me because I know so many people in the world struggle with this problem.

That being said, I love what Jackie Morse Kessler has done with this book.  She's turned such a debilitating problem on its head, and gave the character back her power in the most literal way.  It was wonderful.

The ending wasn't my favorite, I'll admit.  I wasn't disappointed per-se, but I just wished that there was more.

However, I really enjoyed this read.  It's a tiny book that packs a huge punch.  It really lets you see through the eyes of someone with an eating disorder, but is getting back in control of herself...even if it is through rather unconventional means.