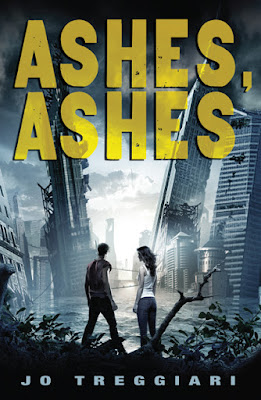 A thrilling tale of adventure, romance, and one girl's unyielding courage through the darkest of nightmares.

Epidemics, floods, droughts--for sixteen-year-old Lucy, the end of the world came and went, taking 99% of the population with it. As the weather continues to rage out of control, and Sweepers clean the streets of plague victims, Lucy survives alone in the wilds of Central Park.

But when she's rescued from a pack of hunting dogs by a mysterious boy named Aidan, she reluctantly realizes she can't continue on her own.

She joins his band of survivors, yet, a new danger awaits her: the Sweepers are looking for her.


There's something special about Lucy, and they will stop at nothing to have her.

Jo Treggiari has crafted a beautiful yet terrifying view of life after the end of the world.

First, Lucy recounts, there were the natural disasters that re-shaped the cities and lands around the world, forcing humans to adapt.

But then came the disease, the plague, and for that human beings had no way to adapt.  Billions died, and even some of the lucky ones, the survivors, were changed forever.

Lucy was once called "Lucky" by her family.  It had been a joke, a play on the fact that she stumbled her way through life, crashing into everything.  She'd been one of the lucky ones.  She lived when so many others died, and since then, she's been on her own.

It's easier on her own.  Or, at least, that's what she's been telling herself.  But then she meets Aiden, and he draws her into the society that's been rebuilt by the survivors.

But they're not alone.  They're being hunted.  Taken.  Killed.

And Lucy is the one they're after.

This is such a great read.  It took a little while for me to get into it.  Generally, when I picture end-of-the-world fiction, I picture it starting at the beginning, when the destruction begins.  Ashes, Ashes begins with Lucy already out on her own, surviving.  But through her eyes we learn her story, we see what happened to her family, and how she's managed to survive.  And from there I could not put this book down!

Lucy is one of those rare characters that are strong but still vulnerable.  I loved her and I adored her interaction with the members of the survivor society and the relationships she builds.

I adored this story.

Read it.  If you like survival stories or end-of-the-world fiction, you will enjoy this novel.

And for my Canadian readers, I have a little treat:  A chance to win your very own copy of Ashes, Ashes.

Just fill out the form below to enter (Canadian mailing addresses only).  Giveaway ends 11:59pm EST June 30th, so get your entries in before then!


And don't miss the rest of the blog tour!
giveaway review