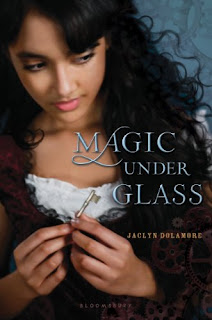 Magic Under Glass - Jaclyn Dolamore
Nimira is a music-hall performer forced to dance for pennies to an audience of leering drunks. When wealthy sorcerer Hollin Parry hires her to do a special act - singing accompaniment to an exquisite piano-playing automaton, Nimira believes it is the start of a new life. In Parry's world, however, buried secrets stir.
Unsettling below-stairs rumours abound about ghosts, a mad woman roaming the halls, and of Parry's involvement in a gang of ruthless sorcerers who torture fairies for sport. When Nimira discovers the spirit of a dashing young fairy gentleman is trapped inside the automaton's stiff limbs, waiting for someone to break the curse and set him free, the two fall in love. But it is a love set against a dreadful race against time to save the entire fairy realm, which is in mortal peril.
I love fantasy.  I grew up on fantasy.  And the world that Jaclyn Dolamore has created in Magic Under Glass is just so beautiful and unique that I can't find words.  Nimira is drawn into a bargain she really can't refuse, to sing alongside a clockwork man as he plays the piano, or to continue forever as a trouser-girl, a low-class dancer.  The only problem is that apparently the clockwork man is haunted.  At least, that's what all the other girls her new boss hired before her thought.  But, as Nimira has no choice, she sticks it out and discovers that the clockwork man isn't haunted.  Not exactly.  Instead, the soul of a fairy prince is trapped inside.

As she begins to make friends with the trapped prince, the clockwork man's secret is discovered and it's a race against time to protect him from those who would see him--and the soul inside him--destroyed.
This book ends on a cliffhanger of sorts, and I was left begging for more.  I think book two is in the works, and I for one can't wait to get my hands on it.
Happy Reading!
-geekgirl