Through Her Eyes - Jennifer Archer 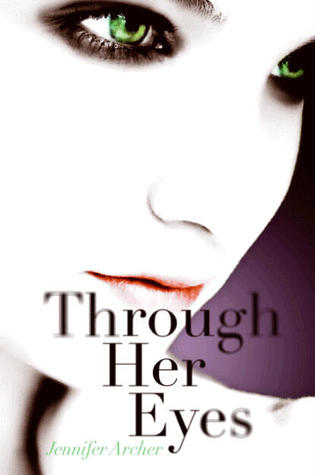 Every ghost has a story to tell.
The last place Tansy Piper wants to be is stuck in Cedar Canyon, Texas, in the middle of nowhere, with a bunch of small-town kids. But when her mother decides to move to the desolate West Texas town, Tansy has no choice but to go along. Once there, Tansy is immediately drawn to the turret of their rickety old house, a place she soon learns has a disturbing history. But it's the strange artifacts she finds in the cellar—a pocket watch, a journal of poetry, and a tiny crystal—that have the most chilling impact on her.
Tansy soon finds that through the lens of her camera, she can become part of a surreal black-and-white world where her life is intertwined with that of mysterious, troubled Henry, who lived in the same house and died decades earlier. It seems their lives are linked by fate and the artifacts she found, but as Tansy begins spending more and more time in the past, her present world starts to fade away. Tansy must untangle herself from Henry's dangerous reality—before she loses touch with her own life forever.

Okay, before I start my review, I'm gonna tell you a little story.
I thought this was a vampire book when I picked it up.
(So I was pretty surprised when it turned out not to be about vampires at all).
To be fair, this was not entirely my fault.  Really.  Honest.
When I received this one, it basically went like this...

Book-person stands with me in front of the big wall of books.
Book-person: Ooooh, do you like vampire stories?
GeekGirl: Um, yeah.
Book-person grabs Through Her Eyes and hands it to me.
The End.


Epic Fail, Book-person.
So yeah, this resulted in this book sitting on my to-read-pile with me complete certainty that it involved vampires.  Even after I read the summary.  (i know...)  So I feel a little dumb now, but that's okay.

Because this was a really good read, and very different from what I was expecting (even once I figured out it was a ghost story).  Most ghost stories involve the ghost coming and directly haunting the character in some manner.  But Jennifer Archer does things differently.

Tansy Piper is stuck moving to a small town in the middle of Texas, where the townspeople are nosy and judgmental, both of her, her beloved grandfather whose health is failing, and her zombie-novel-writing mother.  She's only been there a few days, and already she's sick of it.  So when she finds some strange objects in the cellar, she becomes obsessed with them, and when she starts having visions through the lens of her camera, she allows them to take over her life.

This was a really surprising--and delightful--take on ghost stories for me.  I was expecting more interaction with Henry the ghost himself.  Instead, Henry's story is told through Tansy's flashback visions and through her research into what had been going on back when her grandfather had been her age.  This was unique and original and I really enjoyed it.

As always, though, it comes down to the characters for me, and this story had some great ones.  Tansy was a great narrator, but my favorite by far was Bethyl Ann Pugh (nickname Stinky Pugh) the tiny super-smart, Shakespeare-quoting thirteen-year-old who is a friend to Tansy when she has none.

The one thing that freaked me out in this story (which I think the author was going for anyway) was, due to the fact that when Tansy had the visions, she experienced them through the eyes of a girl who at the time was deeply in love with Henry, Tansy began falling in love with him too.  And let me tell you, Henry is not good news.  He's deeply disturbed, and watching Tansy slowly fall more and more in love with him scared me.

This was a great twist on the modern ghost story, and while I thoroughly enjoyed it, I wish it had been given a different cover.  I have nothing against the cover.  It's very pretty.  I just wish they'd used something that was closer to the fell of the book.