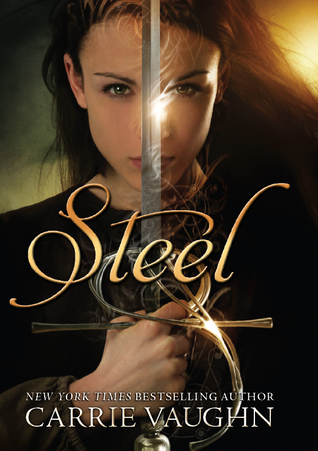 It was a slender length of rusted steel, tapered to a point at one end and jagged at the other, as if it had broken. A thousand people would step over it and think it trash, but not her.

This was the tip of a rapier.

Sixteen-year-old Jill has fought in dozens of fencing tournaments, but she has never held a sharpened blade. When she finds a corroded sword piece on a Caribbean beach, she is instantly intrigued and pockets it as her own personal treasure.
The broken tip holds secrets, though, and it transports Jill through time to the deck of a pirate ship. Stranded in the past and surrounded by strangers, she is forced to sign on as crew. But a pirate's life is bloody and brief, and as Jill learns about the dark magic that brought her there, she forms a desperate scheme to get home—one that risks everything in a duel to the death with a villainous pirate captain.
Time travel, swordplay, and romance combine in an original high-seas adventure from New York Times bestseller Carrie Vaughn.

In the midst of all the paranormal and dystopian YA out there right now--which I love, don't get me wrong--there exists this little novel about time-travel and pirates.

This was an awesome adventure.  Jill, a teen fencer who just lost a huge tournament, is on vacation with her family.  While walking along the beach she finds the tip of a sword.  It is this piece of metal that drags her back in time and drops her smack dab in the middle of a war between pirate queen Marjory Cooper and her former lover Captain Blane.

Jill doesn't want to be part of a war.  She doesn't even want to be there.  She wants to go home.  The only problem is that she has no idea how to get back, but since the tip of the sword she found belonged to Blane, she joins Cooper's crew in search of him.

Aided by Henry, a teenage boy on Cooper's crew, Jill learns more than she ever thought she'd need to know about swordplay, rum, and just how hard it is to stay alive.

This was a fun, exciting read full of adventure and just a little romance.

I really enjoyed it.