Desires of the Dead - Kimberly Derting 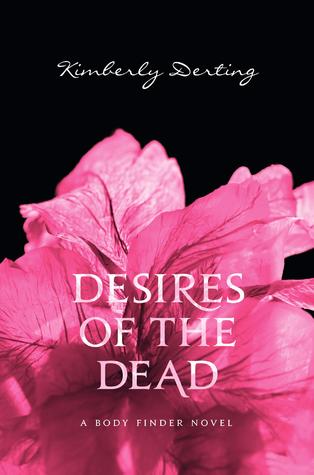 The missing dead call to Violet. They want to be found.

Violet can sense the echoes of those who've been murdered—and the matching imprint that clings to their killers. Only those closest to her know what she is capable of, but when she discovers the body of a young boy she also draws the attention of the FBI, threatening her entire way of life.
As Violet works to keep her morbid ability a secret, she unwittingly becomes the object of a dangerous obsession. Normally she'd turn to her best friend, Jay, except now that they are officially a couple, the rules of their relationship seem to have changed. And with Jay spending more and more time with his new friend Mike, Violet is left with too much time on her hands as she wonders where things went wrong. But when she fills the void by digging into Mike's tragic family history, she stumbles upon a dark truth that could put everyone in danger.

I am LOVING this series.  I read and reviewed The Body Finder, the first in the series, which I absolutely adored.  Desires of the Dead picks up a few months after The Body Finder.  Violet is slowly getting over her encounter with a serial killer, and is settling back into her normal life.

But things aren't really back to normal.  There's a mysterious new boy at school, Violet is receiving dead animals as presents, and silent phonecalls.  And then she discovers another body, and with no way to get to it herself, she leaves an anonymous message with the police, but that only manages to draw unwanted attention to her from the FBI.

This is a great addition to The Body Finder series.  Derting has an amazing skill for setting the stage for a great story, and I love the relationships between the characters, some of which are completely heartbreaking at times.

I don't want to give too much away, for those who haven't read the first book in the series, but just know, this is an amazing read.

I can't wait for the next one, and I don't even know when that's coming out... but I can't wait.

I couldn't put this one down.