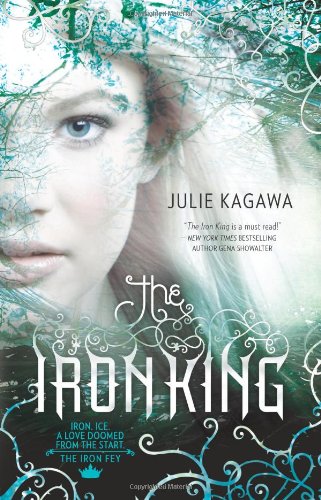 Meghan Chase has a secret destiny—one she could never have imagined…
Something has always felt slightly off in Meghan's life, ever since her father disappeared before her eyes when she was six. She has never quite fit in at school…or at home.
When a dark stranger begins watching her from afar, and her prankster best friend becomes strangely protective of her, Meghan senses that everything she's known is about to change.
But she could never have guessed the truth—that she is the daughter of a mythical faery king and is a pawn in a deadly war. Now Meghan will learn just how far she'll go to save someone she cares about, to stop a mysterious evil no faery creature dare face…and to find love with a young prince who might rather see her dead than let her touch his icy heart.
This book was amazing.  It was like someone took a bunch of my favourite things, added some magic, and just handed it to me in cupcake form.

The world that Kagawa created kind of blew me away.  The faery world is based on A Midsummer Night's Dream.  Puck is real.  Oberon is real.  Tatiana is real.  And Meghan Chase had no idea.

And really, how could she?  She was human.  At least, that's what she thought until her baby brother is stolen away into the land of the fey, and replaced by a changeling.

To save him, she enters the Nevernever (I love that name by the way), and soon discovers that there have been a lot of secrets she's been kept from.  Like the fact that she's not completely human.

This was a great adventure, and it reminded me of Labyrinth (my favourite movie of all time).  I loved the characters--Meghan's strength and determination to help those she loves, Puck's playfulness and protectiveness, and Ash for his honesty and bravery.  And Grim, because, well, he's Grim.  Read the book and you'll see why.

I've already started on book two The Iron Daughter, and I have book three The Iron Queen ready and waiting.  I can't wait to read them.

Amazing read, and highly recommended for fans of fairy tales, adventure, romance, and cats.  (and Labyrinth).

If you haven't read this series yet, give it a chance.  You won't regret it.