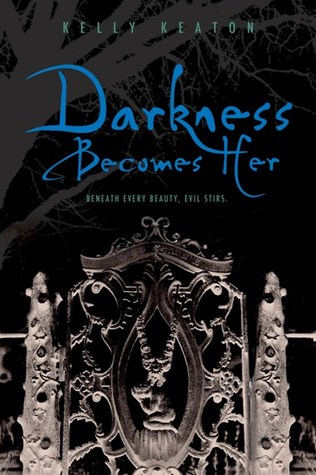 Ari can’t help feeling lost and alone. With teal eyes and freakish silver hair that can’t be changed or destroyed, Ari has always stood out. And after growing up in foster care, she longs for some understanding of where she came from and who she is.
Her search for answers uncovers just one message from her long dead mother: Run. Ari can sense that someone, or something, is getting closer than they should. But it’s impossible to protect herself when she doesn’t know what she’s running from or why she is being pursued.
She knows only one thing: she must return to her birthplace of New 2, the lush rebuilt city of New Orleans. Upon arriving, she discovers that New 2 is very...different. Here, Ari is seemingly normal. But every creature she encounters, no matter how deadly or horrifying, is afraid of her.
Ari won’t stop until she knows why. But some truths are too haunting, too terrifying, to ever be revealed.

I'd like to just say that my favorite part of Darkness Becomes Her was the characters.  I adored Kelly Keaton's characters.

Ari is tough.  She's had to be.  Her mother gave her up when she was just a little girl, and she's been bouncing around less-than-savory foster homes ever since.  Now she works for her foster parents as a bounty hunter.  She can take care of herself.  Or at least, she thought she could, until she found out what actually happened to her mother, and starts following her past all the way to New 2--what used to be New Orleans before it was nearly destroyed by hurricanes years back.


New 2 is nothing more than a run-down tourist trap for paranormal groupies, but vampires and witches and stuff don't exist.  Right?

I adored the cast of characters Ari meets upon entering New 2.  It was like she encountered the paranormal equivalent of the island of misfit toys.


There's romance in Darkness Becomes Her too, but it's a lot more understated than most of the YA out there right now.  It's there (the beginnings of it anyway) but it's not the focus of the book.  The focus is on Ari, who has always known she's weird, but is suddenly realizing just how strange she really is.


I really enjoyed this one.  Be warned though, if you're not comfortable with your vamps and witches sharing the same space with some good old fashioned Greek myths, this might not be for you.


This one ended on a bit of a cliffhanger, so I really can't wait for the next one.