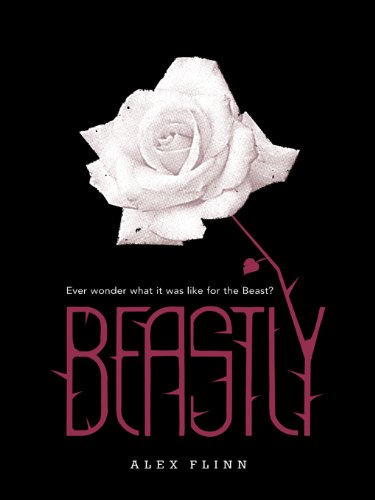 I am a beast.
A beast. Not quite wolf or bear, gorilla or dog but a horrible new creature who walks upright—a creature with fangs and claws and hair springing from every pore. I am a monster.
You think I'm talking fairy tales? No way. The place is New York City. The time is now. It's no deformity, no disease. And I'll stay this way forever—ruined—unless I can break the spell.
Yes, the spell, the one the witch in my English class cast on me. Why did she turn me into a beast who hides by day and prowls by night? I'll tell you. I'll tell you how I used to be Kyle Kingsbury, the guy you wished you were, with money, perfect looks, and the perfect life. And then, I'll tell you how I became perfectly . . . beastly.

I thought that since it was Valentines Day this week, I'd post my review of Alex Flinn's Beastly, which, being a retelling of Beauty and the Beast is super-romantic.  It's also told from the point of view of the male main character, which is pretty unique in YA fiction  especially for a romance.

And what makes it even better, is that it's told from the POV of the Beast.

Kyle thought he had it all.  He had the looks, and he had the brains, money and confidence to back them up.  He ruled his high school, until the day he decided to play a prank on the school's resident freak, by asking her to the dance.  When he showed up with his real date, he expected the girl he pranked to be humiliated.  What he didn't expect was for her to be a witch.

The witch decides that he should be as hideous on the outside as he is on the inside, and turns him into a beastly mix of a bear, a lion, and various other terrifying animals, with the warning that if he doesn't find someone to love him for who he really is before a year passes, he'll be a beast forever.

I loved how much Kyle grew as a character, and I really enjoyed the love story between him and Lindy, as well as his relationships with his housekeeper and his tutor, who were hired to keep him out of the prying eyes of the everyday world, so as not to cause panic or scandal.

The chat room where Kyle converses online with other fairy tale creatures was a nice touch too.

This was a really fun read.  If you're looking for a new take on the classic Beauty and the Beast story, try this.  I really enjoyed it.
And also, if you liked the book, the movie is coming out exactly a month from now.  They've changed some pretty obvious things--his beastly visage is less animal-like and more just scary, and Lindy is a lot prettier than in the book--but I'm sure it will be a fun film!

Happy Reading (and enjoy the clip below)!