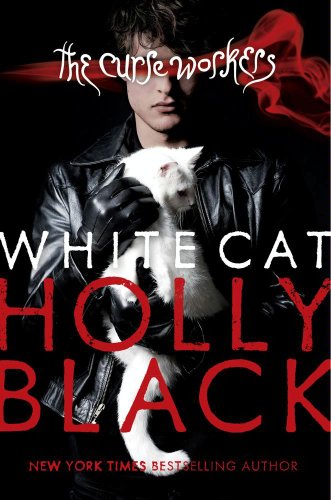 Quite frankly, I don't know why you're still reading this review instead of heading out to the bookstore to pick up a copy for yourself...but in case you wanted to stick around, here's a little more for you...


Cassel comes from a family of curse workers -- people who have the power to change your emotions, your memories, your luck, by the slightest touch of their hands. And since curse work is illegal, they're all mobsters, or con artists.
Except for Cassel. He hasn't got the magic touch, so he's an outsider, the straight kid in a crooked family. You just have to ignore one small detail -- he killed his best friend, Lila, three years ago. Ever since, Cassel has carefully built up a façade of normalcy, blending into the crowd. But his façade starts crumbling when he starts sleepwalking, propelled into the night by terrifying dreams about a white cat that wants to tell him something.
He's noticing other disturbing things, too, including the strange behavior of his two brothers. They are keeping secrets from him, caught up in a mysterious plot. As Cassel begins to suspect he's part of a huge con game, he also wonders what really happened to Lila. Could she still be alive? To find that out, Cassel will have to out-con the conmen.
Holly Black has created a gripping tale of mobsters and dark magic where a single touch can bring love -- or death -- and your dreams might be more real than your memories.


The character of Cassel was well rounded and really relateable despite the fact that this story is set in an alternate universe--one where people can essentially do magic.  I really liked how the universe was set up as well.  Unlike most YA paranormal fiction out right now, where the supernatural aspects are a secret from the everyday world, in this story Holly Black brings it to the forefront.  Everyone knows about Curse Workers.  Their whole society is intertwined with them.  The world has adapted and all of the characters grew up knowing what the Curse Workers could do.

This story was refreshing and different, and I loved it with all my little heart.

p.s. I read this one in 2010.  I was 100% absolutely certain I'd posted this review before now...but apparently not, as it was still sitting in my drafts folder.  That'll teach me to trust myself.﻿
5 stars paranormal review