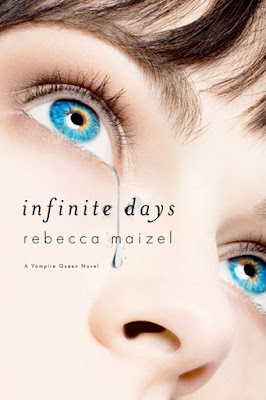 Lenah Beaudonte is, in many ways, your average teen: the new girl at Wickham Boarding School, she struggles to fit in enough to survive and stand out enough to catch the eye of the golden-boy lacrosse captain. But Lenah also just happens to be a recovering five-hundred-year-old vampire queen. After centuries of terrorizing Europe, Lenah is able to realize the dream all vampires have -- to be human again. After performing a dangerous ritual to restore her humanity, Lenah entered a century-long hibernation, leaving behind the wicked coven she ruled over and the eternal love who has helped grant her deep-seated wish.

Until, that is, Lenah draws her first natural breath in centuries at Wickham and rediscovers a human life that bears little resemblance to the one she had known. As if suddenly becoming a teenager weren’t stressful enough, each passing hour brings Lenah closer to the moment when her abandoned coven will open the crypt where she should be sleeping and find her gone. As her borrowed days slip by, Lenah resolves to live her newfound life as fully as she can. But, to do so, she must answer ominous questions: Can an ex-vampire survive in an alien time and place? What can Lenah do to protect her new friends from the bloodthirsty menace about to descend upon them? And how is she ever going to pass her biology midterm?
This was a really fun read.  Lenah is a 592-year-old vampire queen who, at her own request, is turned back into a human.  Having lost the world she once knew, she tries to slip into human life unnoticed.  Except, when you're as pale and as odd as she is, it's kind of hard not to be noticed.

This book flips back and forth between the human Lenah in modern times, and the vampire Lenah throughout history.  We get to see how she was made, and how she spiraled into a life of violence and murder as she aged as a vampire.  Over time, she became numb, and longed for nothing more than to feel again as humans do.  So her maker--her lover Rhode--finds a way to turn her back into a human, but at great cost.

So now she's left with nothing, and she's forced to go into hiding from her vampire coven, lest the find out she survived the ritual.

Only problem is, she's beginning to really enjoy her human life.  She's made friends, and she's fallen in love.

That was the only real problem I had with this novel--other than the fact that Lenah adapts to human life surprisingly well for being nearly 600 years old, and having been asleep for the last 100 of those years--was that the boy she fell in love with seemed completely one-dimensional to me.

But Justin?  All I could see was a pretty boy who liked danger and who became obsessed with her, and she with him.  Despite this, he really brought out the humanity in Lelah.  He made her feel like a normal human girl again, and really forced her to distance herself from the monster she once was.

This was a really good read, and I'm really looking forward to the next one.