As You Wish - Jackson Pearce 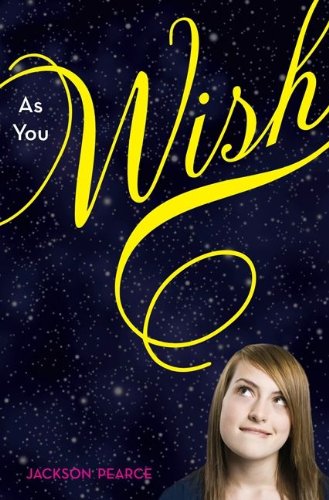 Ever since Viola's boyfriend broke up with her, she has spent her days silently wishing—to have someone love her again and, more importantly, to belong again—until one day she inadvertently summons a young genie out of his world and into her own. He will remain until she makes three wishes.

Jinn is anxious to return home, but Viola is terrified of wishing, afraid she will not wish for the right thing, the thing that will make her truly happy. As the two spend time together, the lines between master and servant begin to blur, and soon Jinn can't deny that he's falling for Viola. But it's only after Viola makes her first wish that she realizes she's in love with Jinn as well . . . and that if she wishes twice more, he will disappear from her life—and her world—forever.
Jackson Pearce spins a magical tale about star-crossed lovers, what it means to belong . . . and how important it is to be careful what you wish for.

This book was everything I wanted it to be and more!  It was a really cute read about a girl who, like it or not, ends up with her own genie...and really, she never asked for this!

Viola's been having a really hard time since her boyfriend Lawrence broke up with her.  They're still friends, but it's just not the same.  She wants to be a part of something, and she feels like she's just driving along, unnoticed.  But apparently, she's not as unnoticeable as she thought, because all of a sudden, she is assigned a Jinn--a genie who's been tasked with granting her three wishes.  The only problem is, she doesn't know what to wish for.  She wants to be a part of a couple again, but she doesn't want anyone falling in love with her just because she wished for it, because then it wouldn't be real.

And then...to make matters worse, she starts falling in love with the Jinn who's there to grant her wishes.

And you thought your life was complicated.

This was a really fun read, and it was everything I wanted it to be.  The dynamic between Viola, Jinn (the genie), and Lawrence (her ex-boyfriend now best friend) is fun and really adorable.  I read this one quickly, and, though the story ended pretty much perfectly, I was sad to bid farewell to the characters.