Life as We Knew It - Susan Beth Pfeffer 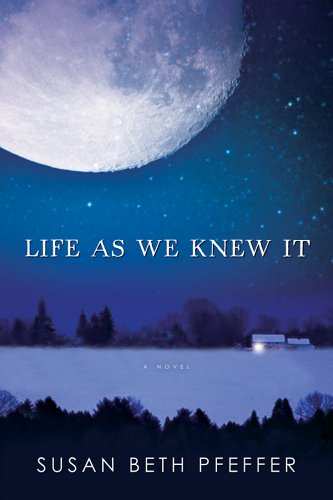 Miranda’s disbelief turns to fear in a split second when a meteor knocks the moon closer to the earth. How should her family prepare for the future when worldwide tsunamis wipe out the coasts, earthquakes rock the continents, and volcanic ash blocks out the sun? As summer turns to Arctic winter, Miranda, her two brothers, and their mother retreat to the unexpected safe haven of their sunroom, where they subsist on stockpiled food and limited water in the warmth of a wood-burning stove.

Told in journal entries, this is the heart-pounding story of Miranda’s struggle to hold on to the most important resource of all--hope--in an increasingly desperate and unfamiliar world.

I loved this book. I'm a huge fan of post-apocolyptic fiction and movies. This is the first in a series (followed by The Dead and The Gone...and The World We Live In) in which an event happens in space that re-aligns the moon's orbit closer to the Earth, causing catastrophic natural disasters. This is those events, told through the eyes of Miranda, a 16 year old girl living in a smallish town in the United States, as her family struggles to adapt in a doomed new world.

One of the things I liked most about this story was how gradual the changes were. First the big moon thing happens, which scares a lot of people, and causes a bunch of natural disasters, but things don't get bad right away--not for Miranda at least.

But slowly but surely everything starts to change. Gas prices climb. Food becomes scarce. Electricity and telephones are lost. One by one, things start to fall apart, and whether or not a character realizes that things are going to change plays a huge part in their ability to survive, and even then...

I really enjoyed this one.  Can't wait for more!