Into the Wild - Sarah Beth Durst 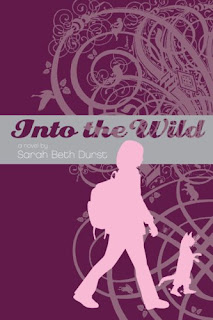 Twelve-year-old Julie has grown up hearing about the dangerous world of fairy tales, “The Wild,” from which her mother, Rapunzel, escaped.
Now The Wild wants its characters back. Julie comes home from school to find her mother gone and a deep, dark forest swallowing her hometown. Julie must fight wicked witches, avoid glass slippers and fairy godmothers, fly griffins, and outwit ogres in order to rescue her mom and save her Massachusetts town from becoming a fairy-tale kingdom.
Sarah Beth Durst weaves a postmodern fairy tale that's fresh, funny, and sweetly poignant.


I love fairy tales.  I have always loved fairy tales, so I had high hopes for this story.  I was not disappointed.
Twelve-year-old Julie is the daughter of Repunzel, and she's perpetually stuck between two worlds--the fairy tale world of her heritage (the Wild), and the ho-hum everyday world where she's growing up.

Years and years ago, Repunzel had led the revolt of the fairy tale characters, which led to their escape from the Wild--the land that had held them captive for so long, forcing them to relive their stories over and over again.  Ever since then, the fairy tale characters have lived out their lives as best they can in the "normal" world, and have tried to keep up the illusion that the Wild doesn't exist.  The only problem is, it does exist.  It's trapped under Julie's bed...or at least, it was trapped.

As the Wild escapes and grows, pulling the fairy tale characters back into its hold--along with a bunch of "normal" people--Julie is forced to go on a quest of her own in order to save her mother, and all of her fairy tale friends.

This was a really great read that took my beloved tales, and turned them on their heads.  I adored the way the author managed to merge the Wild with the real world.

Can't wait to read more from this author.  I have Enchanted Ivy sitting in my to-read pile, and I'm really looking forward to it.