November 14, 2010
I'm having a giveaway for this book HERE
contest is open until Midnight EST tonight (Sunday November 14) 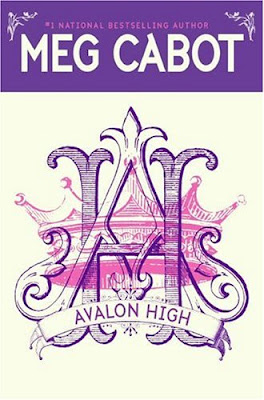 Avalon High, I was starting to think, might not be so bad after all.
Maybe it's not where Ellie wants to be, but if you have to start at a new school, Avalon High is typical enough: There's Lance, the jock. Jennifer, the cheerleader. And Will, senior class president, quarterback, and all-around good guy.
But not everyone at Avalon High is who they appear to be . . . not even, as Ellie is about to discover, herself. As a bizarre drama begins to unfold, Ellie has to wonder, what part does she play in all this? Do the coincidences she's piecing together really mean—as in King Arthur's court—that tragedy is fast approaching for her new friends?
Ellie doesn't know if she can do anything to stop the coming trouble. But somehow, she knows she has to try.

Ellie's a really cool character too.  She's a sweet girl, but she also stands up for herself and for her friends.  I liked that she really didn't believe in the myth, and wasn't willing to play her part in it as instructed.

As always, Meg Cabot's writing is fun and fresh.